Finding Hope in a New Generation of Leadership

I devoted much of last week to spending time with students at four colleges across the country: Trinity (in Hartford, Connecticut), Harvard, U of Virginia, and University of Denver.  It was a refreshing respite from life inside the Beltway, and especially from the daily dose of presidential politics.  In some ways it felt like an antidote to the political paralysis and the failure of government to effectively address many of our economic and social challenges.


At each of the four schools I was speaking on some combination of social entrepreneurship, hunger, poverty and philanthropy.  The students, ranging from undergrads to Masters in Public Policy, were filled with ideas and questions, eager to discuss issues ranging from food waste and hunger, to nonprofit salaries and finding the talent and skills needed to succeed.


I spent the most time at the University of Denver which is establishing a new Institute of Philanthropy and Social Enterprise under the leadership of David Miller a veteran of both government and philanthropy. Students there lined up for a half hour after my lecture to talk about everything from the needs of the low income high schools from which many of them had come, to how technology might be better leveraged to fight poverty.


Unlike the politicians battling it out across the country, there was no trace of rancor or grudge held against anyone else. No one played the blame game.  No one demonized those with different views. They were ready to take responsibility for their own future. All they need from the rest of us is to get out of the way.


At the end of the week I had dinner with my old boss, former Senator Gary Hart, and his wife Lee. They are still keenly interested in American politics, and what Gary emphasizes as the obligation in a republic to put the common good ahead of special interest. “I think I really understood American politics in the 1980’s” Hart said, “and although today’s politics are very different,  I do think there continues to be a latent American idealism that our politicians overlook.”


He’s put his finger on exactly what I’d experienced all week – a new generation of social entrepreneurs that fills me with hope.
Posted by Billy Shore, Bearing Witness at 10:52 AM No comments:

Darren Walker on Pepsi Board: Ethical Dilemma or Ethical Opportunity?

With regard to Ford Foundation President Darren Walker joining the board of PepsiCo, the New York Times asks: “An Activist for the Poor Joins Pepsi’s Board. Is that Ethical?”
http://www.nytimes.com/2016/10/30/business/an-activist-for-the-poor-joins-pepsis-board-is-that-ethical.html?ref=business
The answer has less to do with Mr. Walker joining the board and everything to do with how he behaves on it. Assuming he remains true to the values and personal character that have made him such a compelling and effective leader on issues of poverty and social justice, there’s not only nothing unethical about his new role, but in fact reason to believe he will contribute to even stronger ethical standards for Pepsi as a whole.
If we want corporate America to actually listen to social justice activists, we have to be willing to speak to and with them in their own boardrooms when the opportunities present themselves.  This is how change occurs, not antiseptically at think tanks and foundations but in the push and pull of ideas and arguments across all sectors of nonprofit, government and business – and perhaps most importantly in business.
For 11 years while I as CEO of Share Our Strength, I served on the board of Timberland, and the boot and apparel company (on whose board Pepsi CEO Indra Nooyi served before me.)  It was a great learning opportunity for me, but also a chance to shape and influence an already socially conscious company to be even more so.  Darren Walker faces a taller order given Pepsi's business interests in sugary soda’s and fatty snacks. But who better to help them shift toward a healthier and more progressive future?
Posted by Billy Shore, Bearing Witness at 6:00 AM No comments:

I hope you will both enjoy and be inspired by our latest effort to engage the larger audience necessary to achieve our mission. On Wednesday, October 19 via iTunes we are launching a podcast whose guests include many of the most dynamic leaders at the intersection of food and social change.  It is called Add Passion and Stir, and we need your help in launching and promoting it.


The three way conversations between me and two guests each week range from intimate childhood influences to global social change ambitions. They showcase many champions of our No Kid Hungry campaign and focus on solutions to hunger and poverty as well as other challenges in our communities.


We know more today than we ever have before about how food impacts our health and longevity, our children’s ability to learn, our energy and water use and our environment. We explore all of this in conversations people who wake up every day to change the world, who share their strengths, who add passion and stir.

As of today, these are the sessions of Add Passion and Stir that we've recorded, with more to be produced and released every week (usually on Wednesdays at 1:00)


Seth Goldman, founder of Honest Tea, and chair of Beyond Meat, and Mike McCurry, Co-chair of Commission on Presidential Debate


Chef Joanne Chang of Flour Bakery, and Alan Khazei, co-founder of City Year and CEO of Be The Change


Gordon Hamersley and Gerald Chertavian, founder and CEO of Year Up

Emergency Share Our Strength grant to save lives in Haiti

As the devastating human toll from Hurricane Matthew in Haiti became clear, we reached out over the past few days to some partners working around the clock on the ground there, to commit approximately $20,000 toward their efforts to save the lives of victims who have no food, shelter or medical care. For the past 32 years, since Share Our Strength’s founding in the wake of the Ethiopian famine, we have always allocated a small percentage of funding to international work and Haiti has been one of areas where we’ve concentrated much of it. Although we don’t put the public spotlight on it that we reserve for our No Kid Hungry campaign, it makes a life and death difference to many children and families, and inspires many of our colleagues and stakeholders in their continued support of Share Our Strength. I’m proud that as we’ve grown larger we are still able to move quickly in situations like this to do the right thing when it is needed the most.
Posted by Billy Shore, Bearing Witness at 5:10 AM No comments:

"Monday, Monday, So Good To Me. Monday Morning it Was All I Hoped it Would Be" - The Mamas and The Papas

From northern California to southwest Virginia I’ve been visiting schools during my travels these past few weeks. There is something new to be learned every time. 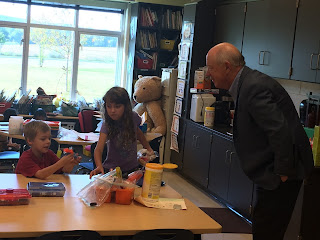 At Prescott Elementary School in Oakland, CA, a school food service official shared that  many more kids eat school breakfast on Monday morning compared to other days of the week … because they haven’t eaten over the weekend.  Yet another way of understanding how some kids struggle, it also underscores the inequality that defines two very different America’s. In one America the weekend is too short to do all of the things we want to do, whether seeing friends, watching sports or trying new restaurants. And come Monday morning our kids will eat the same way as they do every other day of the week. No distinction would ever occur to us.  In the other America, Monday morning’s routine is markedly different. That America’s kids will turn out for school meals in greater numbers than usual. In that harsher America the weekend is too long.


This makes all the more important the hard fought victories we obtain, each of which lays the groundwork for the next. Maryland for example has been one of the states in which we committed to achieve “proof of concept” by investing heavily to ensure full participation of eligible kids in programs like school breakfast and summer meals. For a variety of complicated reasons Baltimore City Schools lagged behind other parts of the state.  Until last week. On Wednesday, Baltimore City and our Maryland No Kid Hungry campaign announced that all Baltimore schools will move breakfast from the cafeteria to our Grab-And-Go model making breakfast accessible to 83,000 students!  More details are available from the Fox News report @ http://foxbaltimore.com/news/local/mobile-carts-with-easy-pre-packaged-foods-in-city-schools-will-encourage-students-to


This kind of systemic change helps even the playing fields for children who suffer the most from the inequality that still divides us. It’s just one of many steps needed to make Monday morning like every other morning of the week.
Posted by Billy Shore, Bearing Witness at 6:42 AM No comments: